Black Friday is fast approaching. It’s a day that many people in the United States eagerly await. Black Friday VPN Deals 2019 discount is a celebration across the country that sees items like electronics go on sale with huge discounts. Retailers take this day as an opportunity to clear out inventory before the year ends.

Black Friday offers have become a huge deal among consumers, so much that it’s not held just in the United States but in countries like the United Kingdom. 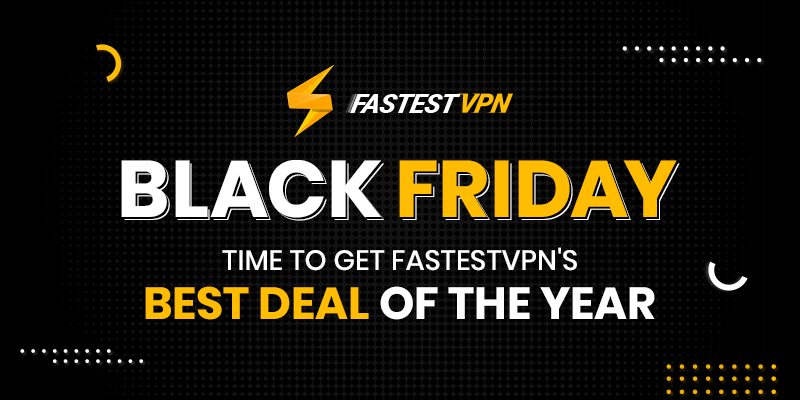 Similar to electronics and other items, many digital services like VPNs get special deals for Black Friday. FastestVPN is one of the leading VPN providers in the world. If you’ve been waiting for the right time to pick up a reliable VPN, FastestVPN is giving you the opportunity with Black Friday VPN deals 2019

This Year’s Best Black Friday VPN Deals – Get Up to 92.5% discount:

It’s an amazing deal for customers who’ve been waiting to grab FastestVPN at an even better price. For just $44.95, you get 60 months of fast and secure internet experience.

Even the one year plan typically costs much more, so rest assured, you’re getting an amazing Black Friday discount here. Additionally, you can choose other Black Friday VPN deals 2019 of ours.

Here are the Black Friday deals offered by FastestVPN:

So hurry up and grab the best deal you want on this Black Friday 2019.

Why choose FastestVPN this Black Friday?

While there will be dozens of VPNs competing in Black Friday VPN deals 2019, not all of them are equal. In fact, many of them don’t stack up in quality; something that you’d expect from a service tasked with protecting your privacy.

It’s a good practice to compare the best Black Friday VPN deals with each other to see which one is offering the most bang for the buck, as well as the crucial VPN features. FastestVPN features cutting-edge VPN technology. With features like AES 256-bit encryption, Malware Protection, Ad-Blocker, and Unlimited Bandwidth, you get the best security and complete freedom on the internet.

Save big money by choosing from one of the Black Friday VPN deals.

The Internet can be dangerous if you’re not careful with what websites you’re visiting. A VPN is a strong solution to threats looming on the internet, such as hackers who want to steal your data.

A VPN lets you stay secure throughout your internet session. It encrypts incoming and outgoing data. FastestVPN utilizes the highly-trusted AES 256-bit encryption method that is trusted by security experts around the world. Internet traffic is secured using this encryption method on every app that you use.

Some online retailer websites or Black Friday VPN deals 2019 may not be accessible in other regions. With the power of a VPN, you can quickly switch to its native region and browse through all the deals.With Christmas deals following after the VPN Black Friday deals 2019, you’d never miss out on deals.

That’s not all. VPN unblocks streaming websites and services for you. It’s always risky streaming through online streaming websites like 123Movies because the content may not have been obtained legally, hence you need to protect your activities from the ISP.

Moreover, VPN enables you to torrent anonymously through torrent trackers such as Kickass Torrents and The Pirate Bay.

Why You Should Avail This Black Friday VPN Deal!

In a short sentence: Because this Black Friday VPN deals 2019 is the absolute value for money!

FastestVPN is ranked as one of the best VPN providers in the world, not only because of the quality of service but also because we’ve made our subscription packages affordable for the masses. In the spirit of Black Friday vpn deals, we’re extending a killer deal to our existing and new customers. Get pure unrestricted access to the internet, you’ll forget there was ever a blocked website.

Black Friday is a time when online retailers hold special discounts during the period. Whether you’re in the United States or living outside, you need a reliable VPN like FastestVPN. Why? Because Black Friday offers are not limited to just the United States, it’s celebrated worldwide.

FastestVPN will let you access Black Friday deals 2019 from other regions which would otherwise be geo-restricted. Get access to websites that just won’t work outside of its region. FastestVPN boasts a network of 250+ VPN servers in more than 35 locations worldwide. You get access to regions like the United Kingdom, Canada, Germany, Australia, and China. And the Unlimited Bandwidth feature ensures that you never run out of bandwidth.

Black Friday and Its Essence

Black Friday is a celebration that takes place during Thanksgiving, in the USA. But as ominous as the name might suggest the celebration is, Black Friday marks a period of huge savings, especially in Black Friday VPN deals 2019. Retailers in the US participate to slash price off items in an attempt to clear inventory and mark a profit.

Black Friday has been so successful that it’s celebrated across the world, such as in countries like the United Kingdom, Australia, and Canada.

Lets FastestVPN help you on this Holiday season by Black Friday VPN Deals 2019 get 92.5% discount on 5 Year Plan

While browsing for Black Friday VPN deals 2019, you must be on the lookout of fake Black Friday deals. Such deals get mixed up among other deals and it’s hard for the general customer to distinguish between them.

One point to remember this Black Friday is that you should always follow reliable blogs to get updates on legitimate Black Friday VPN deals 2019.

You’ll come across deals that seem too good to be true, and they probably aren’t. The best thing to do before clicking the purchase is research extensively about the VPN, read user reviews above all.

Your 5 year deal is really awesome!

Just grabbed the three year plan. Unbelievably cheap! Time to test it out.

Hadn’t heard of this VPN before but the price was too good to turn down. I can confirm the deals are legit, and so is the VPN.

Got this during Black Friday sale at an extremely low price. I’m satisfied so far.

By far one of the best VPN deals I have come across this Black Friday.