How to Watch David Price vs Dave Allen on Kodi

UK fans, prepare for an exciting domestic fight that’s heading your way in July. A heavyweight fight is scheduled to take place in the third week of July between David Allen and David Price. The fight is part of the Dillian Whyte vs Oscar Rivas undercard.

Both fighters are a fitting match for each other, and David Allen believes as such. According to him, either of them “could end it with one shot”. Though David “The White Rhino” Allen believes that he has the upper hand in this fight – going as far as to say the fight won’t go past four rounds. On the other hand, Price isn’t caving into the pressure from his opponent, he had his own display of confidence in a recent interview.

Price might be feeling lucky after his win against Kash Ali. The 36-year old was declared the winner when his opponent Kash Ali bit him in the ring more than once during the fight, leading to his disqualification. Price responded to Allen’s comments on the fight by saying the fight will not even go past two rounds let alone four. 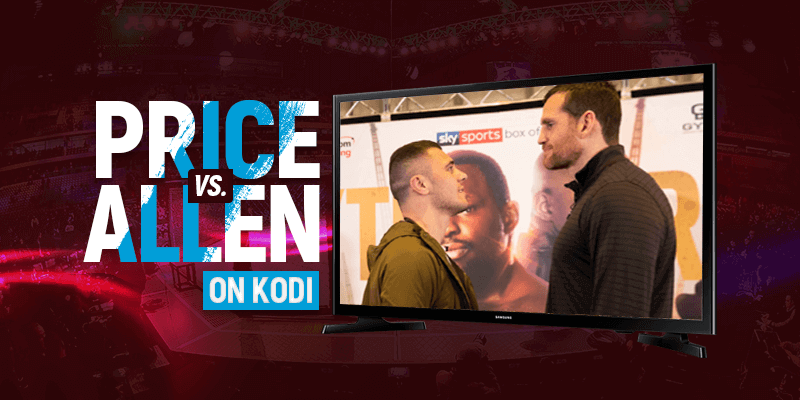 Stream David Price vs. David Allen on Kodi with FastestVPN

Kodi makes for an excellent choice for streaming live events such as this upcoming fight thanks to a great number of add-ons. Kodi’s ability to run third-party add-ons comes from the fact that it’s an open-source application. Its fan-base has created literally hundreds of add-ons, each serving a purpose; whether it’s watching movies, playing games or just maintenance add-ons designed to keep your Kodi’s health in check.

There are several add-ons available that let you watch the fight live, but since DAZN is officially available, you can forgo the trouble of searching a suitable add-on for streaming. DAZN will broadcast the fight live in the United States. And because it’s a paid digital streaming service, you’ll need an active subscription to access the platform.

Geo-restriction is also another problem that you need to know about. DAZN, as a digital streaming service, is not available worldwide. You can only access it from a handful of countries that includes the United States.

FastestVPN’s servers are located around the world, thus giving you the ability to access such geo-restricted services from anywhere in the world.

Here’s what you need to watch David Price vs. David Allen on Kodi:

Remember that you must have a subscription to DAZN in order to stream the fight. There are several add-on for Kodi that allow you to watch sporting events live. You can use add-ons such as Cerebro IPTV+, Sports Devil, USTVNow Plus as alternatives.

Regardless of which streaming platform you decide, FastestVPN will unblock stream for David Price vs. David Allen on Kodi for you. It is compatible with more than 20 devices, so you don’t need to worry about compatibility either.

How to Watch Amir Khan vs Terence Crawford on Kodi