How to Watch Manny Pacquiao vs Adrien Broner on Apple TV

Note: Geo-restriction is a real roadblock for live-streaming. It prevents you from accessing content not available in your region. Use FastestVPN for Pacquiao vs Broner fight and get pass this roadblock easily.

Building on the amazing last year, 2019 is set to succeed with another round of spectacular boxing events. Beginning in January, fans can look forward to the highly-anticipated Pacquiao vs Broner fight.

Adrien Broner is preparing hard for his upcoming battle against the famous Manny Pacquiao who will once again step inside US ring. The 40-year old fighter had been absent since his duel with Floyd Mayweather. But he now returns and not without putting his WBA Welterweight title on the line. There’s no doubt this fight is the one you should look out for.

Having said that, if you’ll be watching home from the comfort of your Apple TV, we are here to help you. Even though this fight takes place in the United States, FastestVPN will unblock the live stream for you. Thus, you can watch Pacquiao vs Broner from anywhere in the world. 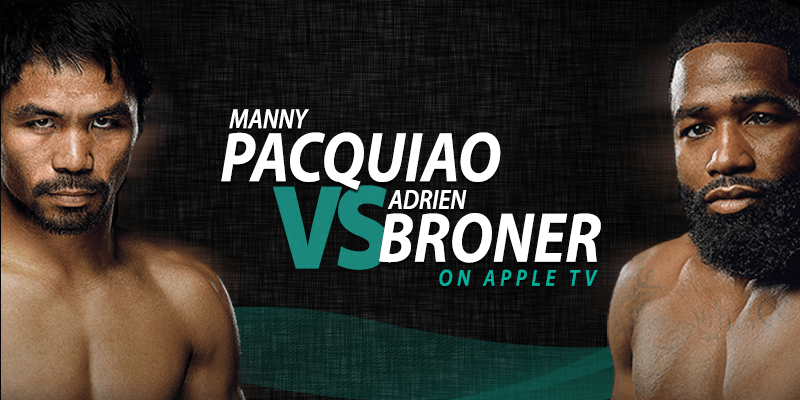 Watching Pacquiao vs Broner on Apple TV is easy. We simply need to catch one live stream over the internet by using a VPN.

Showtime will deliver the Pacquiao vs Broner broadcast on January 19 to people across the United States. But if a cable network is not your thing, you can watch the same on Apple TV using the Showtime Anytime app. But the live stream will be restricted to the United States. This is where FastestVPN comes into play.

Connect to any US server and bypass this restriction with ease. However, you still need to pay for Showtime PPV in order to watch Manny Pacquiao vs Adrien Borner on Apple TV.

If you’re in the United Kingdom, you can watch Pacquiao vs Broner on BoxNation. Both sources require an active subscription.

Here’s how to setup FastestVPN to watch Manny Pacquiao vs Adrien Borner on Apple TV:

The Pacquiao vs Borner event details are as follows:

As we mentioned above, there’s another source for you to catch Pacquiao vs Borner fight on. BoxNation is a UK broadcaster that delivers major events via cable network as well as the internet.

Access to Pacquiao vs Borner live stream requires an active subscription. Once you’ve got that covered, here’s how to use FastetsVPN to watch Pacquiao vs Broner with BoxNation.

AirPlay is a feature in iOS that allows you to pair your iOS device to a Smart TV. You can then mirror the content playing on the device onto the big screen.

Take a look at all the other fights that are part of the main card.

Adrien Borner hasn’t been keeping his fans with much hope ever since he lost two consecutive fights. This Borner’s chance to deliver a knockout that will go on to be a highlight of his career.

Fans want to see Pacquiao’s return to the US ring, and Broner’s fan wants to see the 29-year old bring his A-game to the fight. Get your tickets now if you plan to catch this exciting fight in person, they won’t last long.

But if watching from home on your Apple TV is more your thing, refer to this guide. It’s a simple step-by-step process on how to watch Manny Pacquiao vs Adrien Borner on Apple TV.

How to Watch Deontay Wilder Vs Dominic Breazeale Live Online