How to Watch Emmy Awards Live Stream for Free 2018

The best of the year, from June 2017 – May 2018, will be celebrated on the 70th Primetime Emmy Awards. The 2018 Emmy nominations have arrived only to fuel the excitement more. All TV show fans are anxiously waiting for the awards to air.

It will go live on 17th September 2018 at the Microsoft Theatre in Los Angeles, USA. The host for the night will be the ever charming Colin Jost and Micheal Che. 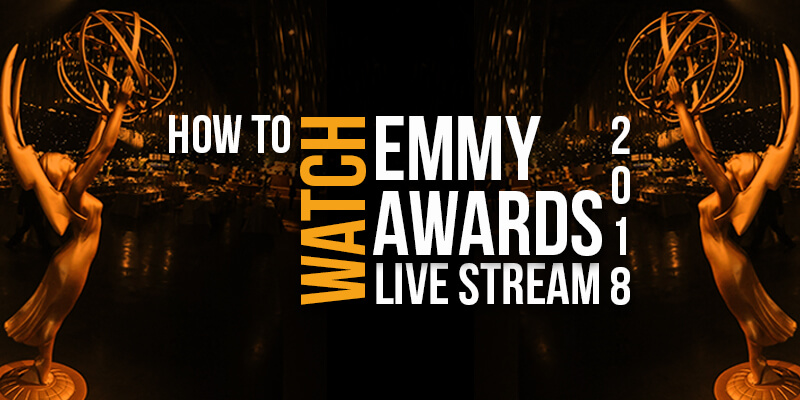 All the fans in the USA can watch Emmy Awards live stream on NBC, which is the official broadcaster. You will be stuck though if you are outside the United States. However, even then you can watch your favorite stars take the win and each second of the glam night with FastestVPN. Skim through and learn how!

We know that NBC is the official broadcaster in the United States but there are other channels airing the awards too. The other options are listed below, though they are all geo-restricted just like NBC. The channels airing Emmy Awards are:

How to Watch Emmy Awards Live Stream outside USA

If you’re in the United States, Australia or Canada, then you are in the clear. However, if you are anywhere outside, you will be blocked out and will need FastestVPN to access those channels. The geo-restrictions of all 3 channels will prevent you from accessing the content. However, with FastestVPN you can overcome all the unnecessary restrictions and stream 70th primetime Emmy Awards outside USA in a few simple steps.

If the above channels are not what you rely on, you can easily resort to Kodi to watch Emmy Awards live stream for free. Kodi being the open source platform, gives you access to TV shows, movies, music and so much more. Inclusive in all of this is also IPTV and live streams of plenty of events. Similarly, you can watch 70th Primetime Emmy Awards live on Kodi. What’s cherry on top? It’s for free!

Here is how you can watch Emmy awards on Kodi:

Note: You will be blocked out if you try to live stream Emmys from outside USA. To get unrestricted access, connect to FastestVPN. Even if you are in US, it is wise to be connected to FastestVPN as Kodi is open source and might invite malware to your device.

To enjoy the award night on your iOS device or on your Mac, follow the steps below as it is:

How to Watch Emmy Awards Live Stream on Xbox or PS4

On your gaming console, you can stream Emmys live even outside US, Australia or Canada. Here is how:

How to Watch Emmy Awards Live Stream on Apple TV

Apple TV doesn’t have a browser yet, so there are two ways to stream Emmys 2018 – through NBC app or screen mirroring.

To watch the awards live stream on Apple TV, here is what you can do:

Note: Be sure to be connected to FastestVPN otherwise even with screen mirroring, you will be blocked out of the channels.

How to Watch Emmy Awards Live Stream on Roku

Roku users can watch the biggest TV award night with the TV’s biggest stars on their Roku device with ease. Here is what they need to do:

Ones with Amazon Fire Stick TV or Smart TV are blessed even without cable. They can watch all their favorite shows and catch up with all events, in this case Emmys, from anywhere in the world.

Emmys is an event that is anticipated by all. Like always, people find workarounds to watch Emmys Awards live stream even if they don’t have cable. Like always, this year too Emmys will be featured on multiple social media platforms.

Mark your calendars and stream Emmys live online on the following platforms:

The recognition of the Emmy Awards is exclusively television based. The nominations have major awards divided into two categories of comedy and drama. The most nominated dramas in each list are Westworld and Game of Thrones. Westworld has secured 21 nominations whereas Game of Thrones has 22. It is a comeback for Game of Thrones as after winning the outstanding drama honor in 2016, it was not eligible for the Emmys in 2017. Stranger things and This Is Us are also in the running. The full list of Emmy nominations 2018 is as follows:

Lead Actor in a Limited Series or Movie

Lead Actress in a Limited Series or Movie

Lead Actor in a Comedy Series

Supporting Actor in a Comedy Series

Lead Actress in a Comedy Series

Supporting Actress in a Comedy Series

Lead Actor in a Drama Series

Supporting Actor in a Drama Series

Lead Actress in a Drama Series

Supporting Actress in a Drama Series

All fans are definitely hyped up to see their favorites vying for the award. For those who want to watch Emmy Awards live stream online without cable, can follow the guide above. Other than overcoming geo-restrictions, even if you are in the region where the channel access is not blocked, be sure to be connected with FastestVPN especially if you are resorting to Kodi for free stream.

Unblock geo-restricted channels whilst protecting your device via FastestVPN! Get subscription and enjoy Emmys 2018 from anywhere!