Are you a fan of Marvel? This guide will surely put you at ease! We’ve highlighted a guide showing you how to watch Marvel movies in order! All the Marvel Cinematic Universe movies below, have been placed in chronological order

This will allow you to enjoy a full movie and TV show marathon of the best that Marvel has to offer. Of course, some of the content hasn’t yet been released and is said to hit the screens by the end of 2024! With that said, think of this guide like a detailed Marvel superhero itinerary with precise details of release dates and more.

If you’re completely new to the Marvel fandom, we recommend watching its movies by its release order. However, if you’re a hardcore Marvel movie fanatic, then the chronological order might be something that you’re interested in.

Either way, and with whichever way you decide to watch Marvel content, this guide will show you how to watch the Marvel movies in order. It will help clear up any confusion if you’ve watched one part of many in long breaks.

All the content is divided into phases and broken up between movies and TV shows. It might be a little confusing, especially since the parts are here and there, but hopefully, this guide will help you get sorted! 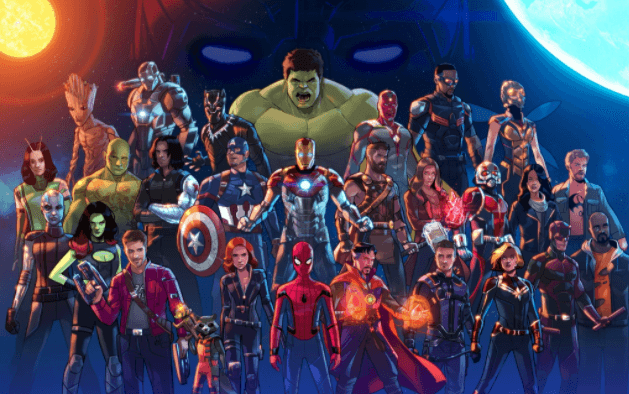 We’ll first dive in on how to watch Marvel movies and TV show counterparts in release order. All the Marvel films and shows indicated below are categorized according to phases. These phases introduce what’s taking place, how a particular plot ends, how new characters are brought in, etc. The phases highlighted below include all the Marvel movie and TV show release dates that also include shows like Wanda Vision and more!

How to watch the Marvel movies in order to chronological dates

This guide is a little more confusing as compared to the one on top. We’ve pinned the following shows according to chronological events rather than their release dates. This list is recommended for those who are already halfway in or completely caught up with the Marvel Cinematic Universe movies.

Here’s a list showing you how to watch Marvel movies in order to their chronological dates:

As for the Marvel TV show chronological dates:

Watch Marvel movies in order on Disney Plus

For those of you who don’t know, most Marvel movies are aired on Disney Plus. However, despite that, you will only find a few of the Marvel content on there. The only two films currently not available on Disney+ are The Incredible Hulk and Spiderman – because the rights are owned by Universal and Sony. You could, however, download or live stream them from other platforms so that your marathon isn’t disrupted.

Also, if Disney Plus is not available where you’re located, you can still access Disney Plus from anywhere with the help of the best VPN. FastestVPN works with Disney+ and will help you watch all of the Marvel movies and TV shows without a glitch!

Here’s a list of the Marvel movies currently on Disney Plus:

Other than that, here are the Marvel TV shows available on Disney Plus:

And you now know how to watch the Marvel movies in order! We mentioned above that Disney Plus is one of the best streaming services that offer access to Marvel Cinematic Universe movies and TV shows. All you need to do is sign up for a Disney Plus account, or use FastestVPN to get access to it.

The best part is that FastestVPN is currently having a Black Friday and Cyber Monday VPN sale! Get it before the offer ends!

The Best Shark Movies on Netflix